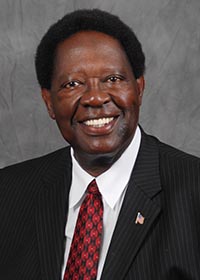 The honor, presented by FIT President Dr. Anthony Catanese, is named for Florida Tech’s first African-American student. It was given at a Florida Tech event Thursday night celebrating the life and achievements of Rev. Dr. Martin Luther King, Jr.

“Dr. Smith is most deserving of this special honor,” said Eastern Florida President, Dr. Jim Richey.  “It’s especially appropriate that it’s named after a student because Dr. Smith has spent his entire career making a difference in the lives of students and at-risk youth.

“We’re fortunate to have him as a member of the Eastern Florida family, and grateful for his significant contributions to our college and community.”

A native of Cocoa, Dr. Smith has had a distinguished career as an educator in Brevard, Broward and Dade counties.

He has served as director, dean and provost of Eastern Florida’s Titusville, Cocoa, Palm Bay and Melbourne campuses, and as executive director of the Moore Multicultural Center. He has also been a classroom teacher, coach, director of athletics, high school assistant principal and research assistant at the University of Florida.

In other areas, Smith has served for more than three decades on the Rockledge City Council.

His many other honors include Campus President Emeritus at Eastern Florida.