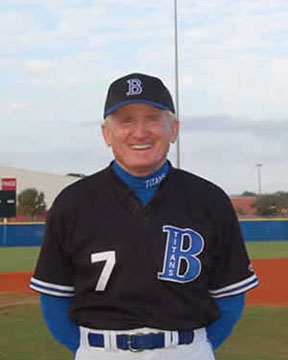 January 7, 2015 - Ernie Rosseau, who won 735 games in his 29-year career as head baseball coach at then-Brevard Community College, has been named to the National Junior College Athletic Association Baseball Hall of Fame.

Rosseau, who in 2013 was named to the Florida College System Activities Association Hall of Fame and remains a faculty member at what is now Eastern Florida State College, will be inducted into the national hall at the JUCO World Series in May in Grand Junction, Colorado.

“There’s no better example anywhere of a college coach than Ernie, who devoted himself to developing the skills of players on the field and developing their characters off the field,” said Eastern Florida President Dr. Jim Richey. “His induction is a well-deserved tribute and I’m thrilled for him. The legacy he left behind can be felt today in the successful growth of our athletic programs.”

Rosseau stepped down as head coach in 2012. Paramount among his abilities was his knowledge of the game.

“I recruited Ernie out of Satellite High,” said Jack Kenworthy who coached Rosseau at what was initially Brevard Junior College and passed the head coaching clipboard to him after retiring from coaching at then Brevard Community College in 1980.

“He stood out from every player I had. He was a student of the game. He had a desire to learn everything he could. That carried through for him playing for me, Eddie Stanky at the University of South Alabama and in the St. Louis Cardinals organization where he spent a lot time picking the brains of the St. Louis coaches.

“That carried over as he has a very good reputation as a hitting instructor. Also, for him to take two BCC teams to the Junior College World Series in 1986 and 1989, that was quite an accomplishment.

“There were 28 programs in the state when he was doing that. To have to win a state tournament and a regional tournament. I’m proud of him and I’m happy for him.”

“I was thrilled to hear that Ernie received this tremendous and deserving honor,” Carr said. “When I was assembling all the information to nominate him all the baseball people I talked to were all very excited and all had the highest regard for Ernie as a person and a baseball mind. I don't know of anyone more deserving than Ernie and what he has done for Eastern Florida baseball.”

For his part Rosseau gave credit to the college.

“It all comes down to BCC,” said Rosseau who is in his 33rd year as a member of the college faculty.

“I played for Brevard Junior College, coached for Brevard Community College and now teach at Eastern Florida State College. Forty-six of my 63 years have been spent at the college.”

Rosseau credited Kenworthy with igniting his interest in coaching.

“Playing and working with Jack started my coaching experience,” Rosseau said. “And when he retired President Dr. Maxwell King and Athletic Director Bob Anderson took a long shot gamble on me.

“My first year we were 9-28 and my third year we were 39-5. That was top-level baseball. Florida JUCO baseball was as strong as any in the country.”