December 18, 2014 - The first students to receive Bachelor's Degrees from Eastern Florida State College were awarded diplomas and praised for their leadership Thursday during a landmark graduation ceremony.

About 1,260 students were eligible to walk across the stage at the King Center for the Performing Arts on the Melbourne campus during two afternoon ceremonies that marked Fall Commencement. 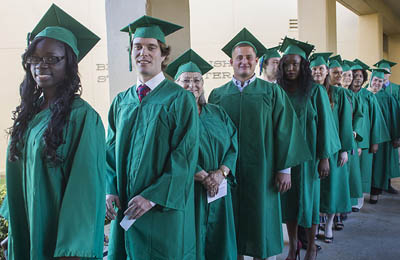 Among them were 12 students who earned Bachelor's Degrees, a first in the college’s 54-year history and a milestone for Eastern Florida which became a state college last year to provide four-year programs.

The Bachelor's Degrees are meeting “an important need in our region by providing students the opportunity to stay close to home to advance their education and their careers,” said college President Dr. Jim Richey.

“This educational opportunity not only benefits the individual but also their families and the larger community in which we live.”

The first recipients are “truly leading the way for the college and the hundreds, if not thousands, of additional Bachelor's Degree graduates who will follow in the coming years,” said Richey.

He went on to honor students receiving Associate Degrees and College Certificates for their “hard work and determination, and by achieving goals that seemed impossible.

“The fact you are here today speaks to the strength of your character and the true power of your dreams,” he said. 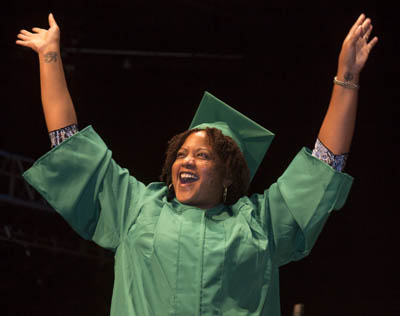 Before the ceremony, the Bachelor’s graduates and their families gathered for a reception with Richey and members of the college’s Board of Trustees to mark the special occasion.

The students included Crystal Watkins, 27, of Titusville, who works as a neurological technician and earned a Bachelor of Applied Science Degree in Health Care Management.

She said the degree “is going to kick-start my career as a physician’s assistant” and that she transferred to Eastern Florida from UCF as soon as the program began in 2013.

“The classes were awesome and the program was convenient because I could go to work and school at the same time,” said Watkins. “The community needs these programs. They’re a perfect fit.”

Another graduate was James Shirley, 28, of Viera, a Coast Guard veteran who used his GI Bill to help him earn a Bachelor of Applied Science Degree in General Business Management.

“These programs make it a lot more affordable” for students to return to college, said Shirley, who wants to land a management position in a growing company. “Hopefully, they’ll be more of them.”

Also graduating was Ericka Ross-Murray, 43, of Palm Bay, who received a Bachelor of Applied Science Degree in Health Care Management.

She works as a patient care specialist in a surgical center and said the degree will allow her to move into management positions throughout the health care industry.

“It’s very fulfilling to get my degree and it’s definitely going to be a major plus to help with my career,” she said. “It will give me a lot of options and I’m really glad the college is offering them.”

The Bachelor’s graduates participated in a 3:30 p.m. ceremony that included graduates from the Melbourne and Palm Bay campuses. 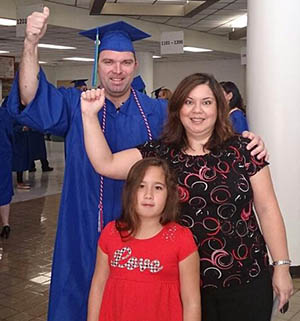 EFSC Graduate and veteran Michael Hudson
celebrates with his family.

An earlier noon ceremony featured graduates from the Titusville and Cocoa campuses.

“You have earned this distinction through your hard work and determination, through long hours and late nights, and by achieving goals that seemed impossible,” Richey told the noon graduates.

“My admiration for you is immense and I congratulate you on your important achievement.”

Both ceremonies were webcast live and will be rebroadcast on WEFS-TV on Thursday, January 15 at 7 p.m. and Sunday, January 18 at 2 p.m. WEFS can be viewed over-the-air on channel 68.1 and on Bright House cable channels 9, 455 and 1068. The webcast archives can be viewed on the college livestream site.

About 830 students are enrolled in the programs with courses available on all four of the college’s campuses and online.

In all, Eastern Florida offers more than 100 degrees and programs in serving Brevard County and the East-Central Florida region.