November 6, 2014 - Retired Army Col. Danny McKnight, whose heroism was featured in the film “Black Hawk Down,” brought his message of leadership to Eastern Florida State College during the first of two lectures Thursday. 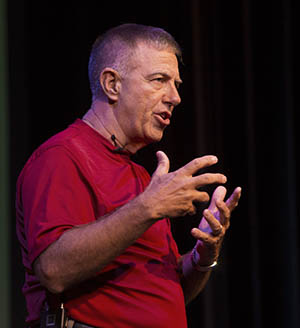 McKnight, a decorated former Army Ranger whose combat experience includes Panama and Somalia, discussed “Successful Leadership on the Tough Days” at the Simpkins Business Seminar for Entrepreneurial Development at the King Center for the Performing Arts Center on the Melbourne Campus.

He received standing ovations before and after his hour-long presentation.

The key to entrepreneurship, McKnight said, is leadership. To that end, he stressed seven tenets of leadership from the acronym LDRSHIP – Loyalty, Duty, Respect, Selfless Service, Honor, Integrity and Personal Courage.

He also stressed the importance of organizing, managing and assuming risk in being an entrepreneur and in life, citing his authorship of a book entitled “The Streets of Mogadishu, Leadership at Its Best, Political Correctness At Its Worst” that he said tells his side of the story of “Black Hawk Down.”

Furthermore, he said entrepreneurs and leaders need to be able to make “the hard, right decision as opposed to the easy, wrong one.

“There are two kinds of leaders, good ones or bad ones,” he said. “We need good leadership. Step forward and make a difference. Leadership will lead us to success every day in our life whether it’s at home, whether it’s work and most importantly taking care of the United States of America as great leaders, every one of us need to do that.”

McKnight also will speak at 11 a.m. Nov. 13 in the Simpkins Fine Arts Center on the Cocoa Campus. The event is free and open to students, faculty, staff and the public.

McKnight was commanding a battalion of the 75th Ranger Regiment in 1993 during operations against warlords in Mogadishu, Somalia.

He was part of Special Forces raid to capture a warlord that sparked a fierce battle and subsequent rescue of U.S. troops, resulting in the deaths of at least 1,000 Somali fighters and 19 American soldiers.

McKnight was repeatedly wounded and received the Bronze Star for Valor. Two soldiers who also took part in the raid were posthumously awarded the Medal of Honor.

His actions were described in the book “Black Hawk Down” and featured in the 2001 Academy Award-nominated movie of the same name.

He is a 1971 graduate of Brevard Community College, now known as Eastern Florida State College. He was a Distinguished Military Graduate from Florida State University in 1973, where he earned a B.S. Degree in Management. In 1985, McKnight earned his Master's Degree in Higher Education from the University of Florida while teaching Military Science. 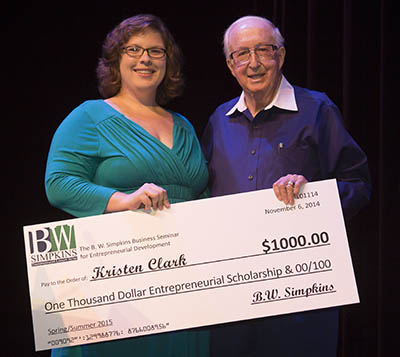 The Simpkins Seminars are named after Bernard Simpkins, a former member of the Eastern Florida State College Board of Trustees who established an endowment to create the sessions that have brought some of the nation’s top business leaders to the college.

Clark, who attends the Palm Bay Campus, is president of the Florida Nursing Student Association chapter as well as mother to a two-year-old daughter.

Her goal is to complete her Bachelor of Science in Nursing and ultimately a Doctorate of Nursing Practice in Psychiatric Nursing by the end of 2020.