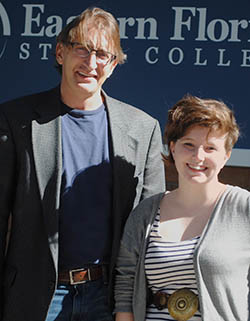 Kassandra Tramel with EFSC English
Professor Warren Jones, who says her
achievement represents the
EFSC value to strive to do your best.

The conference brings together scholars from colleges, universities, community colleges and the public who have something worthwhile to say on matters involving mass society.

“At the start of this project, I simply wanted to explore why a show for boys with female fans called ‘Young Justice’ was cancelled, while a show for girls with male fans, ‘My Little Pony: Friendship is Magic,’ has become a huge cultural phenomenon, with followers known as Bronies,” said Kassandra.

The term Bronies is a blend of bro and pony, referring to the adult male fans of the My Little Pony cartoon.

“As my research unfolded, I also examined the cultural context of gendered fandoms, including looking into other media and similar cultural phenomena from the past,” said said. “My explanation for the Brony phenomenon is complex, but the short of it is that men have more cultural power within our society, even in regards to narratives targeted to completely different demographics.”

After graduating from EFSC with her Associate in Arts degree, Tramel plans to major in Humanities with a focus on Popular Culture.

“I intend to become a scholar, and the easiest way of doing so is to become a professor. I enjoy teaching people, as well as thinking critically, and teaching in a post-secondary environment facilitates both of these well,” said Tramel.

In April, Kassandra attended the Popular Culture Association/American Cultural Association National Conference in Chicago. She also has an academic internship under the tutelage of EFSC English Professor Dr. Warren Jones.

“Dr. Jones has been so helpful along this path, providing a lot of guidance with my academic and volunteer work. He’s taught me quite a bit about the day-to-day struggles that go into being a professor,” said Tramel.