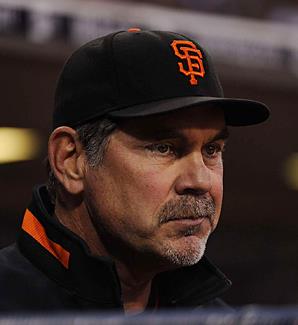 Bochy became the 10th manager – the other nine are in baseball’s Hall of Fame – to win three or more World Series titles. The Giants won the title by beating the Kansas City Royals 3-2 in the series’ seventh and final game, a tense duel at Kansas City.

The Giants won their first two championships under Bochy in 2010 and 2012.

EFSC’s baseball field on the Melbourne campus is named after Bochy who played nine years in the big leagues and just completed his 14th year as a manager.

He was the 1996 Manager of the Year when he took the San Diego Padres to the World Series. He has four National League Championships to his credit along with three World Series championships with the Giants.

“Bruce has established a close family relationship with his players, and he has confidence in their abilities,” Kenworthy said. “I feel the players realize this and want to perform for him.

“He has always been even-keeled. He was our team captain, and his teammates would turn to Bruce to see how he would react to various situations.”

“I’m numb through all this,” Bochy said after Wednesday night’s victory. “You’re so blessed or fortunate to get in the World Series and get to one; it just doesn’t happen very often. I’m amazed at what these guys did.”