Based on updated CDC guidance, masks are now optional and not mandatory for students, faculty, staff and guests at all our campuses and facilities. View more details & FAQ. Summer classes are underway, with Summer Course Registration still available, plus Fall Course Registration also underway. Both Summer & Fall have expanded on-campus options, with class size limits to accommodate social distancing. To support students, select services are available on campus, with prior appointments required in many cases. See the Student Services Guide. 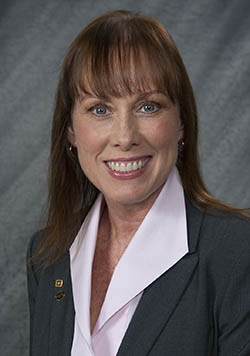 Sparling received the Col. John Dillin Award, which is named after FPRA’s founder and is the highest honor the organization can bestow.

Sparling gained the recognition for what FPRA called “her contributions to the mission of building credibility for the profession that make her a model for those who will follow.”

Sparling served as Vice President for United Way Brevard before coming to Eastern Florida in 2011, where she has played a key role in transforming the former Brevard Community College into a state college.

Among her work has been helping lead re-branding efforts with the college, Space Coast and East-Central Florida communities to tell the story of EFSC’s expanded educational mission in offering new Bachelor and Associate Degrees.

“Suzanne is an exceptional professional who brings dedication and leadership to her job every day,” said John Glisch, the college’s Associate Vice President for Communications. “We’re fortunate to have her talent and spirit on our team.”

Sparling has served in many FPRA roles, including State President in 2008.