See the Melbourne Plan on Video

An artist rendering of the proposed new main entrance to EFSC's Melbourne Campus.

August 18, 2014 - The Melbourne campus of Eastern Florida State College will undergo a major expansion in the next decade with the construction of six additional buildings to house new programs designed to spur job creation and economic growth.

The $74.8 million plan was announced Monday to the college’s Board of Trustees by Eastern Florida President Dr. Jim Richey, who called it a “major investment in the future of our students, our community and the entire region.”

In all, five academic buildings and a new student union are to rise on the campus.

The buildings will serve as homes for many of the college’s 22 new academic programs that offer Bachelor Degrees and Associate Degrees in business, health care and computer information technologies.

They will also provide space for additional programs in the years to come.

“The expanded campus will be a vital center for higher education and workforce development for our community well into the 21st century,” said Richey.

“This will solidify the college’s role in creating new opportunities for graduates, providing skilled employees for business and industry, with the effect being strong economic growth for the region.

“That makes this an exciting once-in-a-lifetime opportunity to help propel our community forward.” 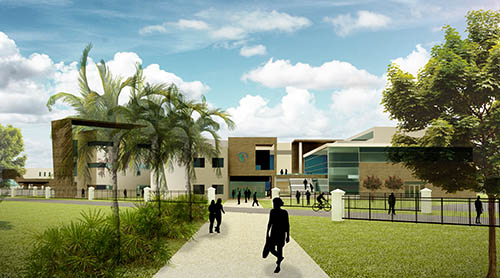 This artist rendering shows the proposed Business and Technology Buildings that would be built at the corner of Post and Wickham Roads as part of the Melbourne Campus expansion.

The Melbourne campus is best suited for expansion for several reasons, Richey said.

• It is home to the college’s largest student population, the place where the most credit hours are taken and the hub for rapidly growing online programs.

• It’s also located in an area with some of the most dynamic economic growth in Brevard County, including the commercial aviation sector at Melbourne International Airport and expanding high-technology and healthcare businesses.

“Our new academic programs are designed to foster job growth in those and related sectors,” said Richey.

“That synergy makes the Melbourne campus a uniquely positioned community asset that can provide students with an advanced education and produce a workforce that local companies need to be successful.”

Richey added the college also has master plans for its Titusville, Cocoa and Palm Bay campuses and will continue improving them as well.

“All of our campuses are valuable to the college and the communities they serve, and we will continue to devote resources to Titusville, Cocoa and Palm Bay to ensure their long-term vibrancy and importance,” he said.

The expansion centers on a design to enhance teaching, learning and the collegiate experience for students.

It includes broad pedestrian walkways that connect the campus together, native Florida plants for lush landscaping, open spaces for socializing and relocating some on-campus roads to improve pedestrian safety.

Work on the first new building is already well underway: A $14 million Public Safety Institute that is on schedule to open in February.

The next project would be a new Health Sciences Institute.

The college received $2.4 million in May from the state Legislature to begin site and architectural planning for the institute and will seek the remaining $17.6 million for construction next year. 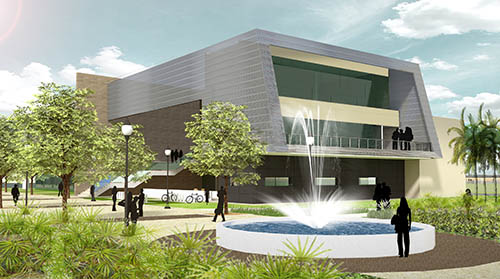 The college may also eventually build additional classrooms, laboratory space, student advising centers and student housing on 10-acres of college-owned land that is now used by Brevard County for the Wickham Park Pavilion.

The county has operated the land under a 30-year lease with the college that ends in 2018. The college has notified county officials it needs the land for future growth, giving them about four years to consider other possible sites for the pavilion.

Most of the funding for the expansion would come through appropriations from the state Legislature.

The college has already received the $14 million in construction money for the Public Safety Institute and has made funding requests to the state from 2008 through 2014 for the other five structures.

Together, those five buildings would cost a total $60.8 million and would be constructed as funds became available.

That would bring the project’s overall cost to $74.8 million.

“The expansion of the Melbourne campus is the next critical phase in expanding our educational opportunities for students, putting into brick and mortar the facilities needed to accomplish our mission in support of all our existing and 22 new programs,” said Richey.

“The results of this expansion will benefit everyone for decades to come and will ensure the college fulfills its mission to provide a high-quality, affordable education in high-demand fields for the citizens of our region.”