2,000 Eligible for Diplomas at Spring Commencement

That was the message Thursday to graduates at Eastern Florida State College during the first of two Spring Commencement ceremonies as former astronaut and Kennedy Space Center Director Robert Cabana told those gathered for the noon ceremony that they should strive for their highest aspirations. 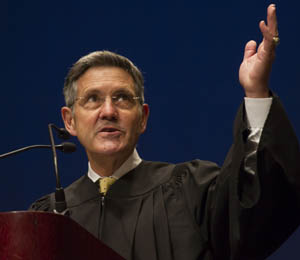 “Hold tight your integrity, persevere in your goals, and always work to the best of your abilities,” Cabana said at the King Center for the Performing Arts on the Melbourne campus. In doing so, he said, life will be rich and success guaranteed.

Cabana, a veteran of four space shuttle missions and a member of the Astronaut Hall of Fame, used his life story as an example of achievement, saying his humble roots in Minnesota led to a desire to fly that made him a Marine aviator, test pilot, NASA’s chief astronaut and commander of the first construction mission of the International Space Station.

He offered graduates these lessons:

“If you want something, set a goal for yourself and do it!” he said. “Keep working toward it and don’t give up until you have achieved it. And when you attain that goal, then set a new one and continue on. And remember, nothing worth doing comes easy.

He went on to tell graduates that “your word is something no one can take from you. It means a lot. When you say you’re going to do something, then do it. Do it because you said you would, because you gave your word.”

“Always do your best,” he continued. “That’s all anyone can ask of you, and only you know in your heart when you’ve given it. Don’t short-change yourself by giving anything less.”

Students also heard a call from Dr. Jim Richey, president of Eastern Florida State College, to reach into themselves to overcome life’s adversity and succeed.

“Never give up. Your strength of character is the most important quality you possess, and it will carry you through the darkest of days and into the sunlight,” said Richey. 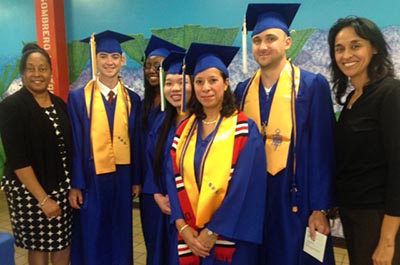 “Never doubt yourself. Your confidence is a powerful force that will overcome any roadblock, and it resides in a deep well of inspiration and hope that never runs dry.

“Never stop dreaming. Your dreams are the magic from which great things are generated, and they will take you to wonderful places you cannot yet see or imagine,” he said.

Students from the Melbourne and Palm Bay campuses took part in the noon commencement, with those from the Cocoa and Titusville campuses walking across the King Center stage during a 3:30 p.m. ceremony.

Replays of both ceremonies are available online via the college's webcast livestream channel. They will be rebroadcast on WEFS-TV on Thursday, June 5 at 8 p.m. and Sunday, June 8 at 1 p.m. WEFS can be viewed over-the-air on channel 68.1 and on Bright House cable channels 9, 455 and 1068.

Graduates, families and friends are encouraged to share photos and memories via social media using the hashtag #efscgrad.

Among those congratulating the newest graduates is Florida Gov. Rick Scott who shared a public letter to all EFSC graduates.

About 2,000 students graduated from the college this spring in a commencement that marked the second graduating class from Eastern Florida since it became a state college and changed its name last year.

It also comes as the college continues expanding educational opportunities to students with 22 new Bachelor Degree, Associate Degree and Certificate programs launched the past two years.

They include nine Bachelor Degree programs in the fast-growth job fields of Business, Health Care and Computer Information Technologies that will be offered in August.

The application process for those and all other college programs is currently underway, with fall classes starting Aug. 18.