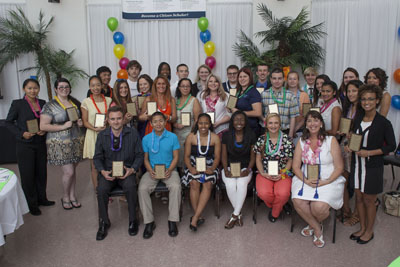 That's the lesson Eastern Florida State College's Center for Service Learning teaches students, giving them the chance to help civic organizations and broaden their understanding of their community and world.

The center held its annual awards luncheon Tuesday at the King Center for the Performing Arts on the Melbourne campus, recognizing more than 5,000 students who have volunteered 240,000 community service hours the past year.

In addition, 43 students will have graduated this academic year with the prestigious Citizen Scholar distinction, each giving back 300 hours or more of their time in service to the community.

Eastern Florida President Dr. Jim Richey praised the students and faculty involved, saying "there is no better example of who we are at Eastern Florida State College than those who look beyond themselves" to help others.

He also thanked the more than 350 community partners who support the program, including businesses and groups that help the poor, aid seniors and meet a host of other critical needs.

Among the Citizen Scholars honored was Brandon Livingston, 19, of Merritt Island, who has spent more than 700 hours assisting patients at Cape Canaveral Hospital. 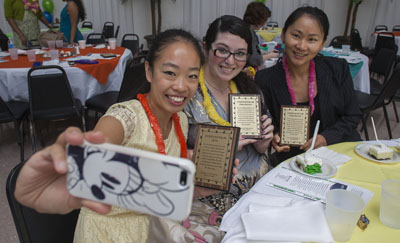 Citizen Scholar honorees who have volunteered at least 300 hours remember the special award by taking a "selfie" with their smart phone.

"Through volunteering, I've met so many kinds of people and become more compassionate. It's really rewarding if you can make a patient smile," he said.

Livingston will graduate May 15 with an Associate in Arts Degree and plans to pursue a Bachelor's Degree in Advanced Allied Health at Eastern Florida in preparation for a career in orthopedics.

Another Citizen Scholar was Piang Lian, 19, of Melbourne, who has spent 350 hours working with the disabled in Brevard County and providing food and water to poverty stricken villages in Haiti and Mexico.

"It has really been an eye-opener," said Lian, who will graduate May 15 with an Associate in Arts Degree and plans to study for the ministry. "It makes me realize that I need to take advantage of every opportunity I get and give back what I have."

Richey noted the center is consistently recognized as one of the top collegiate service learning programs in the nation.

It has been the recipient of the U.S. President's Higher Education Community Service Honor Roll seven years in a row, "an achievement that few colleges can match," he said.

In all, nearly 72,000 students have served almost 2.3 million community service hours since the program began in 1988.