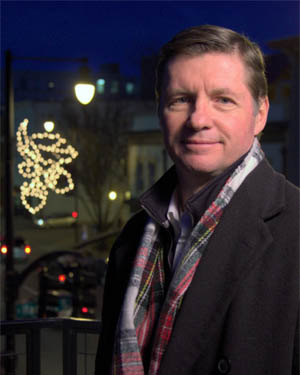 March 31, 2014 - The security wizardry behind the iPhone 5S — and one of the innovators who helped make it happen — will be on display April 17 at Eastern Florida State College.

That’s when F. Scott Moody will discuss his role in the newest model of the popular Apple device when he speaks at the Simpkins Business Seminar for Entrepreneurial Development.

The 11 a.m. event will be held at the King Center for the Performing Arts on the college’s Melbourne Campus. It’s free and open to students, faculty and the public.

When Apple unveiled its new iPhone 5S last fall, Moody’s fingerprints were literally all over the device.

The company he co-founded in Melbourne developed the fingerprint sensor that’s used to unlock the phone or make purchases on online, making it an integral part in the lives of millions.

The idea allowed the former Harris Semiconductor executive to sell his fingerprint sensor company to Apple, turning Moody into another high-tech entrepreneur who hit pay dirt.

“Students will immediately relate to Scott whose intellect and risk-taking is typical of the digital visionaries remaking our world,” said Eastern Florida President Dr. Jim Richey.

“His Brevard County business roots also show that great ideas are born right in our backyard and that Eastern Florida students can have them too. It should be a fun session and I encourage everyone to attend.”

Moody began his career at Harris Semiconductor — now Intersil — in 1980, rising to become vice president of a $200 million division.

He left Harris and co-founded AuthenTec in 1998 after a of couple engineers talked to him about creating a fingerprint sensor that could be applied to a variety of devices.

That took Moody down a road that included raising more than $70 million in venture capital and growing AuthenTec into a company with 300 employees and development centers in Melbourne, FL, China and the Netherlands.

Moody is currently Entrepreneur in Residence at Blackstone Entrepreneurs Network and the founder and director at First Talent Ventures.

The Simpkins Seminars are named after Bernard Simpkins, a former member of the Eastern Florida State College Board of Trustees and the current chair of the EFSC Foundation Board of Directors who established an endowment to create the sessions. Since they began in 2001, the popular seminars have brought some of the nation’s top businesses leaders to the college.