January 30, 2014 - Eastern Florida State College student Beth Perdue has claimed the $2,000 scholarship prize in a state college system vocal competition, while also proving that a second chance at higher education can pay off in a big way. 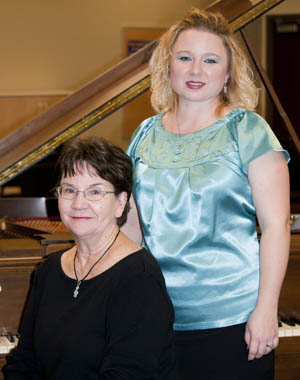 Perdue won the 2014 Student Artist Award in the voice category at the Florida College System Activities Association's Winter Music Symposium held at the University of South Florida. The judges chose Perdue from more than 30 state college students from across Florida who auditioned for the Jan. 24 competition.

"It was nerve-wracking," said Perdue, who sang two opera songs, "Un Bel Di," the famous aria from Madame Butterfly and the German composition "Die Forelle," chosen by the judges from five songs she had prepared. "I was very surprised to win, especially after hearing all of the other vocalists."

Perdue will graduate this summer from Eastern Florida with an Associate in Arts degree and a concentration in music. She is auditioning Feb. 8 for the music program at the University of Central Florida where she hopes to study for a Bachelor's Degree in music performance and become a professional opera singer.

The long road to fulfilling her dream proves it's never too late.

She moved to Cocoa for her husband's career as the youth minister and school principal at Bethel Baptist Church just a block from Eastern Florida's Cocoa campus.

The couple has three children ages 8, 6 and 3 and shortly after the youngest was born, Perdue decided it was time to return to college.

"It's nice to get a second chance because I tried before but there was motherhood and other things that came first. I don't want to end my life with a 'should-have-done' left undone," she said. "I told my children that if mom can do this, they can do anything."

"We had worked hard on preparing those five songs," said Cook. "She was ready."

"Working with students like Beth and understanding the dedication that they have for their studies is one of the great joys of teaching," said Dr. Chan Ji Kim, an EFSC music professor who teaches Music Theory, Digital/Electronic Music and Composition. "Beth's story is very unique. As a mom, I know how busy we are and although Beth has three young children, she has the discipline to make time to practice."

Dr. Kim adds that in addition to Beth's award this year, EFSC has had students win at the Florida College System Music Symposium each year between 2007 and 2011.

"I am amazed at the level of musical talents that students in Brevard County have and I am proud to help them develop as students and musicians. Although we have expanded to become a state college, we will always provide the members of our community access to quality education and an opportunity to reach for their dreams," said Kim.

Perdue did not even realize her vocal talent until she was 15 years old.

She had visited her local library and checked out the 1939 movie musical "First Love" starring Deanna Durbin. Based on the fairy tale Cinderella, the film is about an orphan who is sent to live with her wealthy aunt and uncle.

"That movie inspired me because the star was the same age I was. I told my mom that's what I wanted to do and I just started to sing and explore music and the piano."