January 13, 2014 - Education and community leaders will gather Jan. 22 for the ground-breaking of a new Public Safety Institute on the Melbourne campus of Eastern Florida State College. 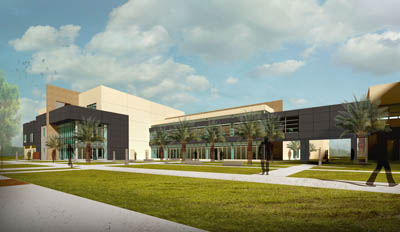 An artist's rendering shows the exterior of the new Public Safety Institute slated to open in February 2015 on the Melbourne campus.

The 10 a.m. ceremony will include remarks by college President Dr. Jim Richey on the importance of the new institute, which will provide training for law enforcement officers, corrections officers, firefighters and others in critical public safety roles.

The building will also mark the start of a planned expansion of the Melbourne campus as college officials seek funding from the state Legislature for three other new buildings to house its growing business, heath care, and science, technology, engineering and math (STEM) programs.

The programs include nine new Bachelor Degrees, two of which were launched in 2013 with seven more scheduled to start in August 2014.

Law enforcement and other public safety leaders from across Brevard County are expected to attend the ground-breaking, which will occur on the southeast side of the campus next to the Dr. Joe Lee Smith Teaching Center (Bldg.7).

The $13.2 million structure will have 66,500-square-feet of space. It will include a mock jail cell, mock courtroom along with labs and other facilities where students will learn the latest in a variety of criminal justice fields.

The building is scheduled to open in February 2015, replacing aging public safety facilities which will be razed.

News media and others attending the event should park next to the Bruce Bochy Baseball Field and follow signs to the ground-breaking site nearby.