July 15, 2013 - The first students to graduate since the name change to Eastern Florida State College have come from one of its new programs: Emergency 911 dispatchers who help protect the community and save lives. 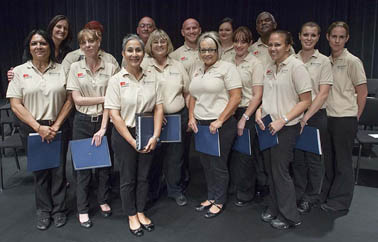 14 students from the 911 Public Safety Telecommunications Program received their certification Monday as members of its inaugural class.
The ceremony at the Simpkins Fine Arts Center on the Cocoa campus also marked the first time students have completed their studies at Eastern Florida, which was born July 1 to reflect an expanded mission to offer Bachelor Degrees. Eastern Florida was previously called Brevard Community College.

“It reflects the college’s own mission of community service, and I commend them and the program’s faculty and staff. The graduates are meeting an important need.”

The 911 program is among 20 new four-year, two-year and certificate programs that Eastern Florida is starting this year and in 2014.

Another eight Bachelor Degree tracks in business, health care and information technologies are scheduled for launch in August 2014.

A range of other new offerings includes the 911 program to fill ranks in law enforcement, firefighting and other public safety fields.

Several of the graduates have already been hired by the Titusville, Cocoa and Port Canaveral police departments.

For more information on the 911 emergency dispatcher program, contact Tonia Graham at 321-433-5695 or grahamt@easternflorida.edu.