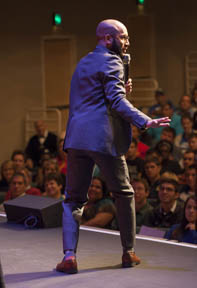 Extreme Tour master of ceremonies E.J. Carrion entertained the crowd at the King Center with his high-energy style.

November 14, 2013 - A special B.W. Simpkins Lecture Series event called the Extreme Entrepreneurship Tour hit the King Center for the Performing Arts on Thursday with a presentation designed to give prospective young entrepreneurs a close-up, personal look at their potential for success.

Speakers included Chad French of Lake Butler, FL, whose company has skyrocketed to worldwide renown and New Jersey’s Michael Simmons, who has been named among the top entrepreneurs in the nation.

They were preceded by a high-energy presentation from master of ceremonies E.J. Carrion, a Texan who is accomplished in his own right as the No. 1 Amazon best-selling author of “Accelerate Your Success: How to Create A Future and Stand Out When College is Not Enough.”

The book teaches students how to market and brand themselves, and Carrion equated entrepreneurship with skydiving.

“Whatever you want to do in life, jump,” he said. “Be willing to do things other people won’t so you can have what they don’t have.”

Eastern Florida President Dr. Jim Richey opened the program by noting the synergy between the tour stop and the college.

“The Extreme Tour comes at an exciting time for Eastern Florida State College,” Richey said. “In August, we launched our first two Bachelor’s Degrees in Business, with one track in General Business Management and the other in Health Care Management.

“We are also planning to unveil more Business Degrees next year in Public Safety Management and Sales and Marketing Management. Those new educational opportunities can give students the tools they need to start their own business and pursue the American Dream.” 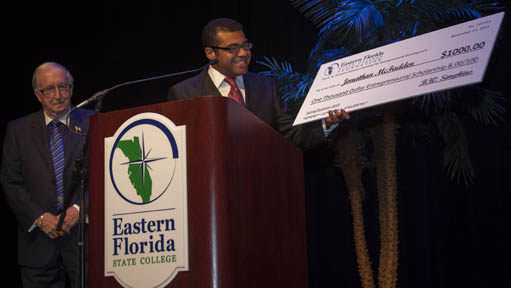 The series is named for Bernie Simpkins, a highly successful Space Coast entrepreneur who launched the lecture series by creating an endowment in 2001.

“Since then, some of the nation’s top businessmen and women have come to the college to tell their stories of success to students,” Richey said. “His generosity also led to the college’s Business Entrepreneurship Program, which was named the best emerging program by the National Association of Community Colleges in 2010.”

Simpkins told the audience of about 500 what his mother said to him when he was away at college: “Hold your head up high and be someone.”

A highlight of the session was Simpkins’ presentation of a $1,000 scholarship to Jonathan McFadden, president of the Student Government Association on the college’s Cocoa Campus who is pursuing a Bachelor's Degree in Business. He is an entrepreneur in his own right, opening the Viera Studio for the Performing Arts. 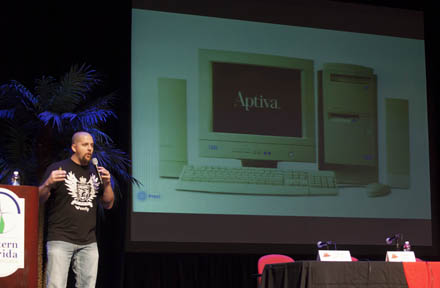 Entrepreneur Chad French told the crowd how he went from high school dropout to computer programmer based on his passion for starting his own business.

Chad French, a dropout turned computer programmer, shared his rags to riches story in which he launched PeerFly, a fast-growing sales and marketing agency. The company's main claim to fame is the online affiliate marketing tool PeerFly.com, which French built using his Windows Notepad and having zero dollars in his pocket.

His message was encapsulated in three points: “You don’t have to be the smartest person in the room; money is not a requirement to get ahead, instead fund your life with passion and dedication, results will always follow; if you can’t you must, if you must you can.”

Michael Simmons was just 16 years old he co-founded his first business, Princeton WebSolutions, which was later named the number one youth-run web development company in the nation by “YouthBiz Magazine.”  He is also co-author of "The Student Success Manifesto."

Simmons and French shared the lessons they learned as young entrepreneurs.