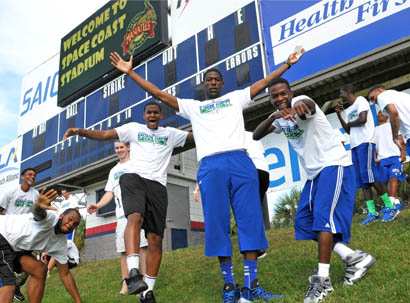 From the introduction of its nine athletic teams, Athletic Director Jeff Carr throwing out the ceremonial first pitch to the college concert choir singing the National Anthem, the evening was a success.

The event was part of the rebranding of Eastern Florida State College from Brevard Community College and the introduction of its first two Bachelor’s Degrees this month in General Business Management and Health Care Management.

Eight more Bachelor Degrees in Information Technologies, Health Care and Business are scheduled to start in fall 2014, pending approval from the Florida Department of Education.

About 1,000 people attended the event, including several hundred from the college. Free Eastern Florida t-shirts were scooped up fast as college staff handed out information about academic programs and career opportunities. 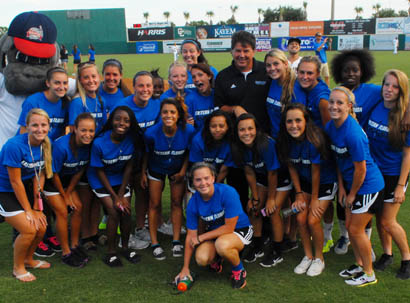 “This is one of the big community events for the college in Brevard County, so it’s neat,” Carr said. “To get out here and to have people see all of the athletes and the video of all the things we have, people really are taking notice.

“And it’s not just athletics, it’s the fine arts we have, the academics we have, and it’s the student government we have. There are lots of activities that students can get involved in.”

Women’s soccer, which finished the 2012 season as the NJCAA Division I national runner-up, is ranked No. 2 in the country by the NJCAA and the National Soccer Coaches Association of America (NSCAA.)

In addition to women’s soccer, four other teams – softball, baseball, men’s basketball and golf – qualified for the 2012-2013 postseason with golf finishing fifth in its 11th consecutive appearance in the NJCAA national tournament.