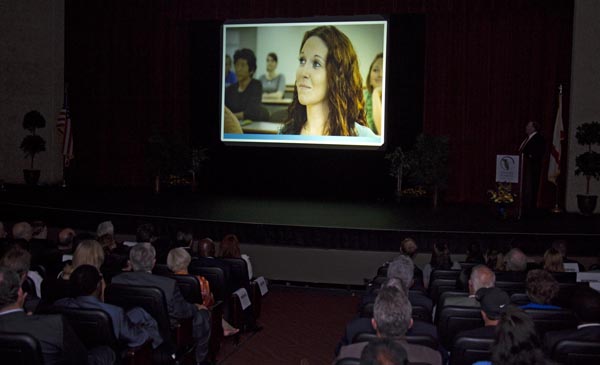 The commercials — featuring an all-student, faculty and alumni cast — will air on cable channels throughout Brevard County and Central Florida starting July 1. They also will appear at movie theaters, on websites and the college’s TV station, YouTube channel and Facebook page.

The advertisements tell the story of Eastern Florida building on the excellence of BCC’s past, and ask students and the community to “look to the east” where they will find the colleges’ nationally-recognized academic programs to advance their education.

The college plans to offer another eight Bachelor’s Degrees in August 2014. 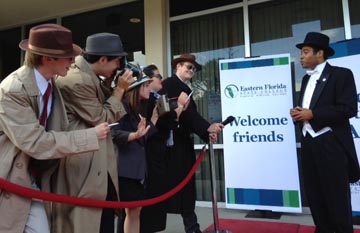 BCC theatre students pose as paparazzi at the red carpet premiere of the College's new advertising campaign that will kick off July 1 when BCC becomes Eastern Florida State College.

More than 200 leaders from the community and college attended the move-premiere themed event, which included roles performed by students.

Eastern Florida President, Dr. Jim Richey, said the TV campaign is designed to “imprint the Eastern Florida brand so it becomes as recognized by this community and the region as the BCC brand has always been.”

That includes making Eastern Florida a household name, letting students know the college is dedicated to their individual needs and gaining the community’s support for its new direction, he said.

“When you’ve seen these TV spots over and over again, you’ll understand and appreciate why these three words were chosen to describe the Eastern Florida mission — explore, achieve, succeed,” said Richey.

“They pay tribute to our county’s heritage and our future, not only as a place where exploration has been part of our DNA, but also the role of this college as a place where you can explore who you are.

“They also speak of our commitment to our students’ need to achieve, and talk of the dreams and aspirations of our students, their families and our community to succeed in their careers and in their lives.” 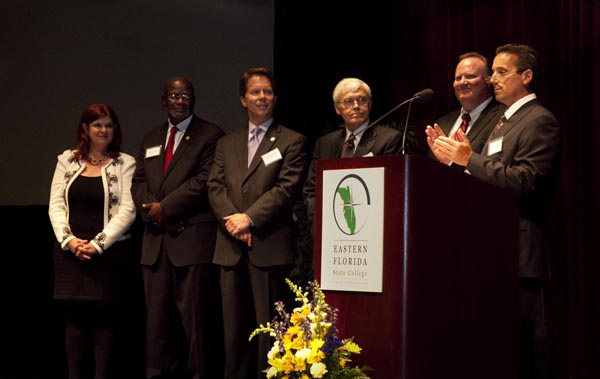 As the Trustees were introduced to the crowd, Chair Alan Landman applauded the new advertising campaign, saying he was proud to be part of the team shaping the college's future as Eastern Florida.

Richey also thanked the college’s Board of Trustees for their leadership in taking the half-century old college “into the future with a bold new plan” to create more academic programs to meet the changing needs of the region.

“We are extremely excited to see what the future holds, and can’t wait to get started,” said Alan Landman, chair of the Board of Trustees.

The trustees approved the college’s new name in December. It has also been approved by the Florida Legislature and Gov. Rick Scott.

Effective July 1, the college’s new URL address will be www.easternflorida.edu. The current www.brevardcc.edu web link will also remain in effect to aid in the transition.

The same day will also see the college’s WBCC-TV station change its call letters to WEFS-TV. The station provides educational and entertainment programming to  3.4 million potential viewers throughout Central Florida.

Eastern Florida joins 22 other institutions in the 28-member Florida College System that have changed their names in recent years to reflect the addition of baccalaureate degrees and achieving state college status.