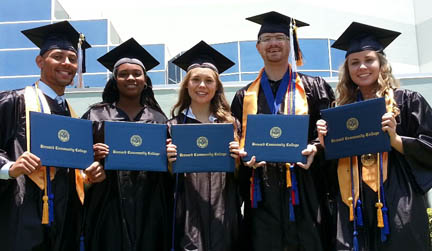 May 16, 2013 - About 1,900 students were eligible to receive their degrees Thursday as the last graduating class from Brevard Community College walked across the stage at the King Center for the Performing Arts.

The final 4 p.m. ceremony was interrupted by a fire alarm at approximately 4:50 p.m., leading to an evacuation of the King Center. After a check by emergency personnel, attendees were allowed to reenter and commencement resumed after about a half-hour delay.

Spring commencement marked the end of one era and start of another, said BCC President, Dr. Jim Richey, who spoke about the college’s proud legacy ranked among the top community colleges in Florida and the nation.

It's a reputation Richey attributed to “the more than a half-century of dedicated work by our superb faculty and staff” in helping students succeed.

He also cited the “outstanding character of our students and nearly 89,000 graduates,” including those who received their degrees Thursday. 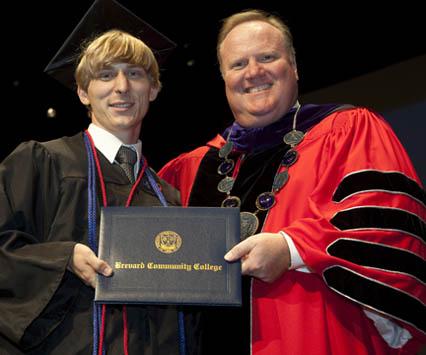 Jeremy Painter, who served as the Student Government Association Vice President on the Cocoa Campus, was the last official BCC graduate to cross the stage and receive his diploma from president Dr. Jim Richey.

“BCC alumni include leaders in government, business, medicine, military, entertainment and sports that use their education to improve the lives of people in Brevard, in Florida, in the United States and across the world,” said Richey. “I urge all of you to do the same, never forgetting that in pursuing your own dreams, you can also have an impact that resonates far beyond yourselves.

“That strength of character has always been the heart of BCC and will be the heart of who we are at Eastern Florida State College, a college that will build on the excellence of the past to propel us forward.”

A special moment came during the noon ceremony when Richey was joined on the stage by three previous BCC presidents: Dr. Maxwell King, Dr. Mike Kaliszeski and Dr. Jim Drake.

Richey thanked them for what he called their “hard work, generosity and extraordinary efforts in making us who we are today.”

The next chapter in the college’s history will build on a foundation that began in 1960 when it opened as Brevard Junior College. A separate Carver Junior College for African-American students opened the same year.

The schools merged in 1963 and moved to the present location of the Cocoa Campus. The college was renamed Brevard Community College in 1970 when the state of Florida created a system of two-year colleges.

Since its inception, the college has served more than a half-million students. About 35,000 students take courses annually on the Titusville, Cocoa, Melbourne and Palm Bay campuses, and online.

BCC has among the top graduation rates in the 28-member Florida College System, and the highest graduation rate among state and community colleges in Central Florida.

It is also ranked 19th among more than 1,200 community colleges in the nation in awarding Associate Degrees.

The change to Eastern Florida State College is the result of extensive community outreach that found strong support from students and businesses to offer Bachelor’s Degrees to achieve two important goals: Provide students with more opportunities for in-demand jobs upon graduation, and provide local and regional businesses with the 21st century workforce they need to prosper.

The college plans to offer 10 Bachelor Degree tracks in business management, health care and information technologies. The first two programs will begin in August and another eight are scheduled to start in August 2014.

The college will also continue to offer its traditional curriculum of more than 100 Associate Degrees and certificate programs, including several new Associate Degree programs starting this year and in 2014.