April 9, 2013 - "Midsummer," an abridged version of the classic William Shakespeare comedy "A Midsummer Night's Dream," has three performances at the Simpkins Fine Arts Center on April 23 and 25. 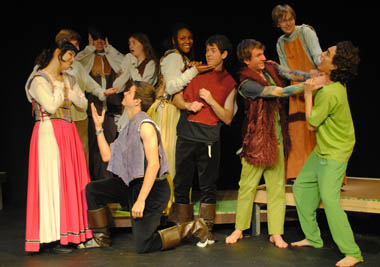 The cast of “Midsummer” are in rehearsals in preparation for performances at Brevard Community College on Tuesday, April 23 and Thursday, April 25.

Students in the BCC Department of Performing and Visual Arts Acting 2 class will present the short comedy, which was adapted by Larry Nehring when he was artistic director at the Cleveland Shakespeare Festival.

The Shakespeare comedy unfolds fast and furiously in this abridged one-act version, trimmed to the story's essential romantic escapades. When Hermia and Lysander decide to elope, Demetrius, who is also in love with Hermia, follows with his girlfriend, Helena. But a magical interference results in hysterical mixed-up pairings. In the end, all the couples are brought back together for a happy ending.