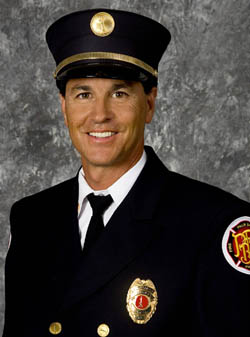 He has been named Florida Career Firefighter of the Year for 2012 for his heroic off-duty actions when he put himself in harm’s way to save the life of a woman in distress.

Hamor has taught at BCC’s Institute of Public Safety on the Melbourne Campus since 2008, serving as an instructor in medical first responder, EMT and paramedic classes.

Hamor was nominated by Palm Bay Fire Chief Jim Stables, who called his actions “a shining example of what true character is all about” and said Hamor is someone who “epitomizes the fire-rescue commitment to always do the right thing.”

The incident occurred in July 2012 when Hamor was heading home after completing his shift. While driving on Babcock St. near Port Malabar Blvd., he noticed a slow moving vehicle heading toward him.

He glanced at the driver and noticed she appeared to be in distress. The vehicle then crossed the median into oncoming traffic. Hamor turned around and positioned his vehicle in front of hers in an attempt to get her to stop.

Once he stopped the vehicle, he found the driver was unconscious and was not breathing. Firefighter Matthew St. Pierre, who was also on his way home, pulled up to help.

The woman, Florence Moore, 69, was stabilized, transported to the hospital and survived a heart attack.

“My whole family just thanks him from the bottom of our hearts for being there and doing what he could,” Moore told FLORIDA TODAY.

Hamor has been a member of the Palm Bay Fire Department since 1988, and received the department’s Medal of Valor and Life-Saving Award for his actions in the incident.

“Lt. Hamor is just one of the many reasons why Palm Bay is such a great place to call home,” said Palm Bay Mayor William Capote.

“We are so proud of him and appreciate all he, and of all the men and women who dedicate their lives to public safety, do on a daily basis to serve our citizens. That is what we are all about.”