March 5, 2013 - The zany murder mystery farce "Lucky Stiff" will be presented the weekend of March 15 at the Simpkins Fine Arts Center on the Cocoa Campus. 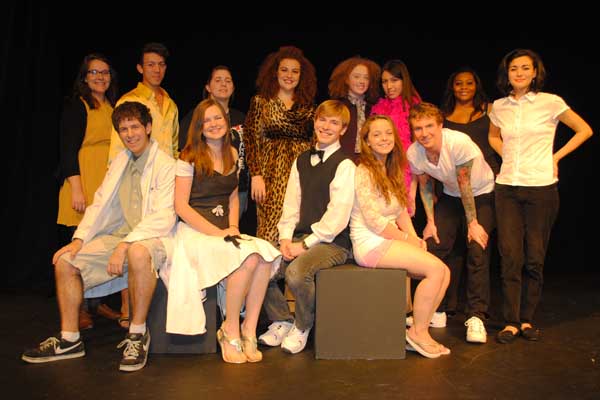 The cast of "Lucky Stiff" includes the students in Jeanine Henry's Theatre Performance and Rehearsal class.

The cast is comprised of students from the Theatre Rehearsal and Performance class in BCC's Department of Performing and Visual Arts.

Performances are Friday, March 15 and Saturday, March 16 at 8 p.m. There's also a Sunday matinee on March 17 at 2 p.m. All shows take place on the Simpkins Center's Main Stage. Tickets are $10 for adults and $7 for students, seniors and members of the military.

"Lucky Stiff's" book and lyrics are by Lynn Ahrens, with music by Stephen Flaherty. The play was the first off-Broadway show for the Tony Award-winning team, won Washington's Helen Hayes Award for Best Musical, and is now performed frequently across the country.

Based on the novel "The Man Who Broke The Bank At Monte Carlo" by Michael Butterworth, it's a funny, offbeat murder mystery farce complete with slamming doors, mistaken identities, $6 million bucks in diamonds and a corpse in a wheelchair.

The story revolves around an unassuming English shoe salesman who is forced to take the embalmed body of his recently-murdered Atlantic City uncle on a vacation to Monte Carlo. Should he succeed in passing his uncle off as alive, Harry Witherspoon stands to inherit $6 million. If not, the money goes to the Universal Dog Home of Brooklyn, or else to the gun-toting wife of the casino owner.