February 14, 2013 - Entertainment industry leader Mike Curb's lucky break came as a struggling college student when he had the nerve to walk into Atlantic Records alongside singer-songwriter Bobby Darin and follow the star onto an elevator.

When Darin asked which division Curb worked in, he told the well-known singer that he just wanted to meet him.

Instead of kicking him out, Darin let Curb explain how he'd written the song, "You Meet the Nicest People on a Honda," which had been picked up by Honda for its national motorcycle advertising campaign.

Darin happened to know the commercial jingle and hired Curb for $100 a month to write songs for his company.

Curb told audiences at Brevard Community College today that he has never forgotton Darin's kindness and has tried to offer similar help to others during his almost five decades as an award-winning songwriter, producer, record company owner, racing team owner and politician. 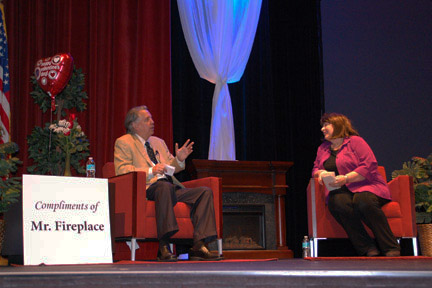 Mike Curb tells entrepreneur Jean Newell how he went from Cal State college student to music industry legend with a star on the Hollywood Walk of Fame.

Curb spoke on both the Cocoa and Melbourne campuses as this spring's featured Simpkins Entrepreneurial Lecture Series speaker, sharing memories and lessons learned during a fireside chat-style interview conducted by local entrepreneur Jean Newell, who asked what advice he'd give a younger version of himself if he could go back in time.

"I wish I had gone beyond two years of college because the risk you have if you don't finish college and start a business is that if it fails, you don't have something to fall back on," Curb told the crowd in Cocoa.

Curb Records, based in Nashville, has produced more than 400 No.1 records, 1,500 Top 10 records and its artists, which include Tim McGraw and Winona Judd, have won a total of 23 Grammy Awards.

He was elected as California’s lieutenant governor and served as acting governor for about a year, and his motorsports career included sponsorship of Dale Earnhardt's car during his first Winston Cup winning season.

Curb also has a distinguished record in public service and philanthropy, with his Mike Curb Family Foundation donating millions in support of educational programs.

"Mike Curb is proof that dedication and hard work can pay great rewards, and that inside everyone is a vision to create something that has the potential to affect others in profoundly positive ways," BCC President Dr. Jim Richey told the audiences.

"He is also an example of what it means to give back to others, using his success to support programs in music, education, healthcare and the arts at colleges and universities across the nation."

The lecture series is named after Bernard Simpkins, a former member of the BCC Board of Trustees who set up an endowment to create the sessions that have brought some of the nation’s top business leaders to the college. 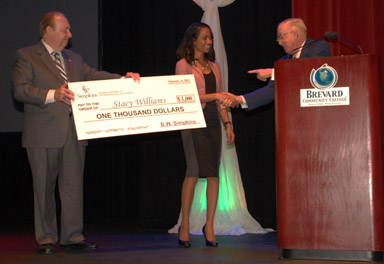 Simpkins’ endowment also started BCC’s Business Entrepreneurship Program, which was named the best emerging program in the nation in 2010 by the National Association for Community College Entrepreneurship.

As part of today's events, Simpkins presented a $1,000 scholarship for a winning essay on entrepreneurship to Stacy Williams, a student on BCC's Palm Bay Campus who plans to pursue the College's Dental Hygiene A.S. degree.

Williams moved to this country from Jamaica in 2010 and has a 4.0 grade point average, all while working as a manager at a local frozen yogurt shop.

Curb told Williams and other aspiring entrepreneurs in the crowd to view their College professors as mentors and to focus on surrounding themselves with the finest co-workers possible.

"Find people better than yourself and then you have a business," said Curb. "I want the best songwriter, the best producer or the best race car driver.

"You can be someone who thinks like an entrepreneur within a company environment."