February 13, 2013 - The Brevard County Bar Association has honored Brevard Community College Trustee Steve Charpentier for his leadership role at BCC and work with other community organizations.

Charpentier received the recognition at the Bar’s 14th Annual Professionalism Awards luncheon, where he gained the Private Lawyer Award for what the Bar called his “tireless pursuit and practice of the highest ideals and tenets of the legal profession.”

Charpentier, who currently serves as the BCC board’s vice chair and has previously served as chair, used the occasion to urge his fellow attorneys to use their skills to assist community groups that are working to improve Brevard County.

“Step outside your realm in the legal community and into the greater realm of Brevard County where you can also make an important difference,” he said. “Attorneys are not afraid to make the kinds of decisions that can help many organizations succeed.” 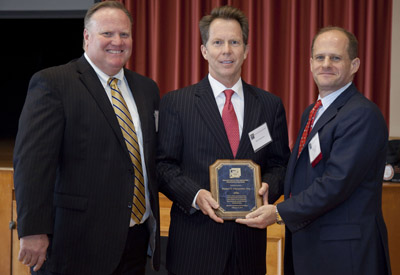 Charpentier was introduced by BCC President, Dr. Jim Richey, who said Charpentier is providing “exceptional leadership at one of the most important times in the college’s 53-year history.”

Richey cited Charpentier’s support for the college’s move to start offering four-year bachelor degrees and become Eastern Florida State College this summer as examples of his efforts to increase educational opportunities to students.

“His passion, dedication and tireless public service are a model I hope others will follow,” said Richey. “I am certain that his efforts will resonate for generations to come as the college moves forward to meet the educational needs of Brevard County, Central Florida and the state.”

Charpentier, who practices law in Melbourne, was named to BCC’s Board of Trustees in 2008. He is a former president of the Brevard County Bar and is a member of the 18th Judicial Circuit Nominating Committee.

He graduated from Brevard Community College in 1976 and the University of Central Florida in 1978. He earned his law degree, with honors, from Florida State University in 1981.