January 22, 2013 - An innovative leader in the entertainment industry whose company has produced more than 400 chart-topping hits will be the featured Simpkins Lecture Series speaker Feb. 14 at Brevard Community College.

Mike Curb, the founder and chairman of Curb Records in Nashville, and former head of MGM Records and Verve Records, will speak twice in free sessions open to students and the public.

His first presentation will be at 10 a.m. at the Simpkins Fine Arts Center on the Cocoa Campus, followed by another at 11:45 a.m. at the King Center for the Performing Arts on the Melbourne Campus. 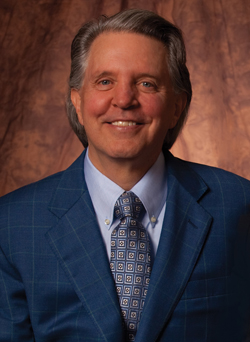 Curb’s company has produced more than 400 No.1 records, 1,500 Top 10 records and charted more than 4,500 total records featuring some of the top names in country, pop, rock and Christian music, such as Tim McGraw and Wynonna Judd.

Curb’s interests have produced success in other fields as well, including motorsports where his teams have won 10 national championships with more than 300 races in 25 different series.

He also has a distinguished record in public service and philanthropy.

He served as the 1976 co-chair of the Ronald Reagan California Campaign for President, and later co-chair of President Gerald Ford’s campaign in California. In November 1978, he was elected as California’s lieutenant governor and served as acting governor for about a year.

His Mike Curb Family Foundation has donated millions in support of programs in music, education, health care and the arts at colleges and universities.

“Mike is a shining example of an entrepreneur whose hard work has led to great success, and who has used that success to help others through his many philanthropic efforts,” said BCC President, Dr. Jim Richey. “We’re honored to have him on our campuses and in our community.”

The lecture series is named after Bernard Simpkins, a former member of the BCC Board of Trustees who set up an endowment to create the sessions that have brought some of the nation’s top businesses leaders to the college.

Simpkins’ endowment also started BCC’s Business Entrepreneurship Program, which was named the best emerging program in the nation in 2010 by the National Association for Community College Entrepreneurship.