The ceremony took place at the Bernard Simpkins Fine Arts Center on the Brevard Community College Cocoa Campus, where hundreds gathered to witness the start of Ivey’s administration.

Ivey was elected in November to replace Sheriff Jack Parker, who did not seek reelection after serving eight years. 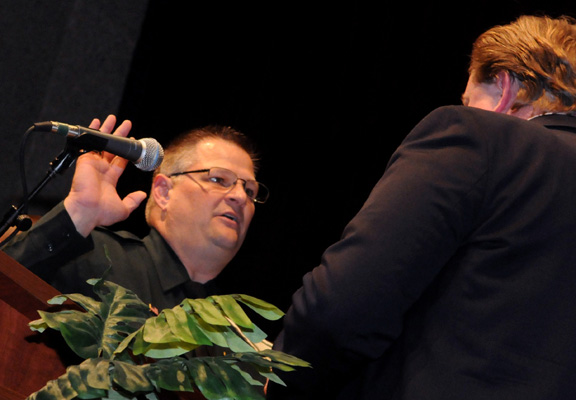 Ivey thanked Parker for his support and spoke about the responsibility that goes with the office.

“Our jobs as law enforcement officers empower us at many levels, but none more important than the authority we are given to change lives,” he said.

“If you stop to consider that our jobs may require us to take someone's life or take away someone's freedom, you immediately recognize the authority this job brings with it.

But I believe it is most important to recognize the opportunities and abilities this job gives us — the ability to save lives, to protect citizens and forever impact life in a positive way,” he said.

Ivey was introduced by BCC President, Dr. Jim Richey, who said Ivey has “proven time and again why he is the right man, at the right time, for this important job.”

“His selfless devotion to duty is an example of public service at its very best, and I know he will do everything in his power to make us safe in our homes, in our schools and on our streets,” said Richey.

Richey also thanked Parker, saying he has “dedicated every waking hour to protecting the citizens of our community with the utmost professionalism, exhibiting strong leadership in the field and compassion for the victims of crime.”

“I have no doubt that he ranks as one of the finest sheriffs in the history of Brevard County,” said Richey.