Clinton used the stop to praise community colleges, calling then a pathway to success for millions of Americans.

"I love community colleges, and I love them for a lot of reasons. First, they work, and they represent the way America ought to work," he said. 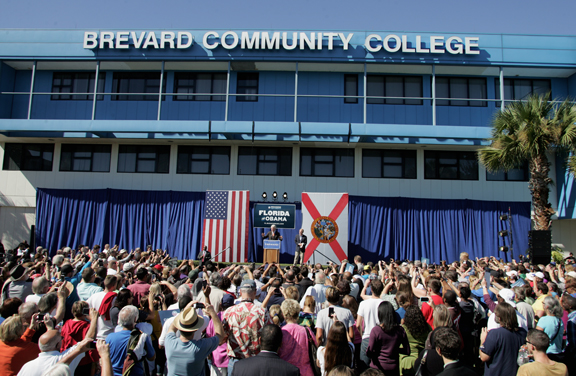 Clinton also urged the pro-Obama crowd of about 300 people to back the president's reelection.

Clinton was joined by U.S. Sen. Bill Nelson, who spoke about NASA's successful efforts to create a new generation of spacecraft following the retirement of the shuttle fleet.

The rally was the latest in a list of major political events held at BCC.

During the 2008 presidential race, then-U.S. Sen. Barack Obama held a rally on the Titusville Campus,  and U.S. Sen. John McCain met with his supporters at the King Center for the Performing Arts on the Melbourne Campus.

Earlier this year, former Republican Speaker of the House Newt Gingrich held a roundtable on the Cocoa Campus to discuss the future of space exploration during his run for the GOP presidential nomination.

And this summer, Florida Gov. Rick Scott held another roundtable on the Cocoa Campus that focused on Florida's defense industry and the possible impact of federal budget cuts.

BCC also teamed with Florida Today to host a series of candidate forums in September and October on two BCC campuses that gave the public a front row seat on key issues in the 2012 elections. The forums continued a partnership between the College and newspaper that has seen them host similar events in 2004, 2006, 2008 and 2010, presenting a platform for more than 100 candidates to express their views.

Because the College observes a four-day work week, BCC students do not have classes on Fridays, which made it possible to hold the event on the Palm Bay Campus without causing an inconvenience for students, faculty and staff.