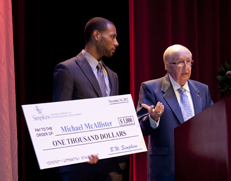 EFSC student Michael McAllister receives a scholarship from local business leader Bernie Simpkins after writing the winning essay that outlined McAllister's goal to own his own dental practice.

Novemeber 14, 2012 - Speaker Joseph Duda was not the only person to share his “American Dream” at this week’s B.W. Simpkins Business Seminars for Entrepreneurial Development at Eastern Florida State College.

Two EFSC students received financial assistance from the EFSC Foundation, giving them the chance to continue their goals of earning a degree.

Michael McAllister was the recipient of the Bernie W. Simpkins Entrepreneurship Scholarship that provides $1,000 over an academic year. 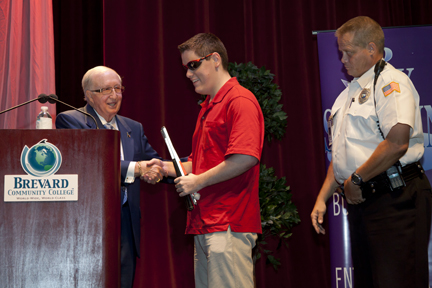 Derek Roberts thanks Bernie Simpkins for his donation. Roberts was accompanied on stage by EFSC security guard John Reffel who frequently assists the visually impaired student around campus.

Derek Roberts, who has been visually impaired since birth, will receive special equipment to assist in his education, purchased by the EFSC Foundation thanks to an extra donation from Bernie Simpkins.

“Success is determined by your effort so keep up the hard work and don’t ever lose sight of what you hope to achieve,” McAllister told the crowd.

He plans to graduate from EFSC in spring 2013 with a general A.A. degree and A.S. degree in Chemical Technology before pursuing a bachelor’s degree.

McAllister wants to become a dentist and run his own practice. Roberts, a first semester student, hopes to become a linguist.

Both were among those attending the Tuesday and Wednesday lectures along with members of the community, local high school students and EFSC business students who are part of the College’s Entrepreneurship Program, which grew out of the Simpkins lectures.

Duda recalled his immigrant grandfather coming to Florida from Slovakia, buying farm land in Oviedo, and then building a multi-generational company that has existed for 86 years. 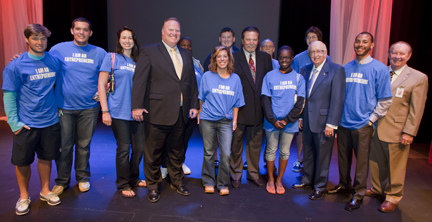 The result can be seen in developments like Suntree and Viera that have spurred significant economic growth along the Space Coast.

“Have a strong faith in God – and in free enterprise,” said Duda, former chief executive officer of A. Duda & Sons, Inc., who called the United States the greatest country in the world because of its philosophy of hard work, sacrifice and vision.

The Simpkins seminars were endowed by Brevard County entrepreneur Bernard W. Simpkins to teach the fundamentals of entrepreneurship. The free lectures bring entrepreneurs to EFSC to speak about their challenges and triumphs. They also offer insight into today’s economic trends.

“The students we honored today are the perfect example of how hard work and sacrifice can pay off,” said EFSC President, Dr. Jim Richey.  “We’re honored to help them launch their dreams to a successful life.”

This week’s lectures were held at the King Center for the Performing Arts on the Melbourne Campus and the Simpkins Fine Arts Center on the Cocoa Campus.