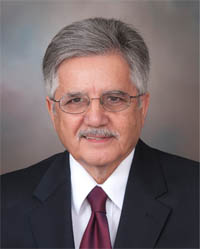 Jahangir Moini, M.D., M.P.H. is an international author of 18 medical textbooks for various publishers including McGraw Hill, Prentice Hall, Jones & Bartlett and Cengage Learning. In addition to continuing his venture as an author, Dr. Moini has been a professor for over 30 years. He is currently an adjunct professor with the Eastern Florida State College Science Department at the Palm Bay Campus. Current courses include Anatomy and Physiology, Introduction to Health Care and Medical Terminology.

After graduating medical school from Mashhad University in 1972, Dr. Moini worked in a private practice for nine years. During that time, he began his journey as a professor at Tehran University, School of Medicine. Later, he received a Masters of Public Health from Tulane University.

In addition, he was a Physician Liaison of the Florida Society of Medical Assistants for seven years. Further contribution toward his experiences include being a curriculum specialist at many colleges, including Corinthian Colleges. He also was a member of the Advisory Board for National Accrediting Commissioner of Career Arts and Sciences for two years.

Above all his accomplishments, Dr. Moini is passionate to share his knowledge and experiences with his students. Being an educator has been his ultimate calling.