The Virtual Undergraduate Research Exhibition, presented by the Office of Undergraduate Research, is an online variation of our biannual, in-person event in which students showcase original research, scholarly projects, and creative works. Instead of students coming to campus to display their research posters and give presentations, the EFSC community and the general public are invited to view this term's student research submissions below. 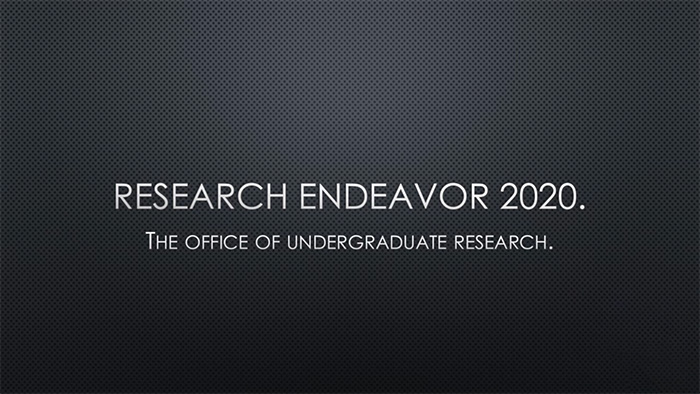 Abstract: The early 2000s are remembered as a budding time for other technologies, such as the World Wide Web, known commonly as the Internet, and the advancement of NASA technologies, such as satellites and space carriers. The most common space satellite is MIR, which went into orbit in 1996 and finished its rounds in 2001. However, with the early advancements of technology came an age of jaded moral grounds and values. A certain level of darkness came about in the early 2000s that was the grounds for evil forces to rise. In this PowerPoint presentation, I explain the prevalence of dark forces used in early 2000s literature, music, some television shows, and real-life events. The early 2000s were a time for dark forces to emerge. This research project conveys the prevalence of dark forces.

Doubling Down: From Self-Motivation to Peer Inspiration

Abstract: From the tested effects of placebos in medicine trials to the impacts of power posing for individuals in workplaces and before interviews, the power of positive thinking is accepted as fact. Still, many students have not realized how it can affect their academic and career success, nor how it can empower them as leaders among peers. The key to many successes is believing in oneself. Self-affirmations are a proven technique for building self-confidence, but less acknowledged are their impact on others. If an individual can foster belief in their success, they can then foster that same confidence and belief in those around them. This is how anyone can transform themselves into leaders, not just of tomorrow, but now, on their campuses. One can change their own thinking, increase their confidence, and improve their chances of success by telling themselves it is possible. If one’s aim is to succeed, one will need to garner the support of others with a passionate and believable appeal. If one wants to achieve groundbreaking research or any change in this world, one must gain the attention and following of others. One of the best ways to gain followers is to believe in their potential. Encourage others, and the achievement possibilities become limitless. Sharing confidence and successes increases the odds for everyone. I have persevered, despite illness, and influence fellow students to be part of achieving competitive academic research successes through shared positive thinking and empowerment. 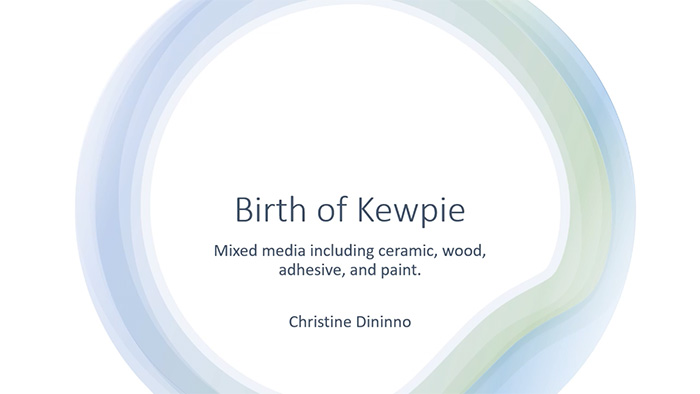 Abstract: This is a mixed media piece consisting of ceramic, wood, adhesive, and spray paint. Conception and construction began in 3D Design with Professor Gelalles. I continued to construct and finish it over the next semester. It is inspired by pop culture and fine art. The sculpture mimics the subject of the classic painting "The Birth of Venus" by Sandro Botticelli. There is a figure depicted positioned in a mollusk shell, but it is a mermaid version of a classic Kewpie doll. The Kewpie is a more modern icon than Botticelli's Venus, yet the doll's comic strip origins and history make it, arguably, just as historically relevant. The statue blends the staging of Venus with the whimsical mood inspired by the Kewpie Doll's facial features and physique. The Kewpie is striking a confident pose atop the half-shell. The statue is painted in an aged bronze hue to add a sense of aged regality to contrast its humorous mood. Although the piece is meant to be light-hearted, it is a comment on the impact of art, as well as craft and consumerism in culture. The conflicting messages of the piece represent the different aspects of culture that hold meaning. Everyday items become just as important, serving as illustrations of cultural norms and human aspirations. 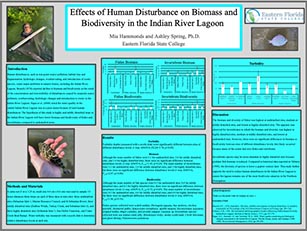 Abstract: Human disturbances, such as non-point source pollution, habitat loss and fragmentation, hydrologic changes, over-harvesting, and the introduction of exotic species, create major problems in natural waters, including the Indian River Lagoon. Sigua et al. (2000) noted the water quality in the central Indian River Lagoon is at a poor status because of such human disturbances. 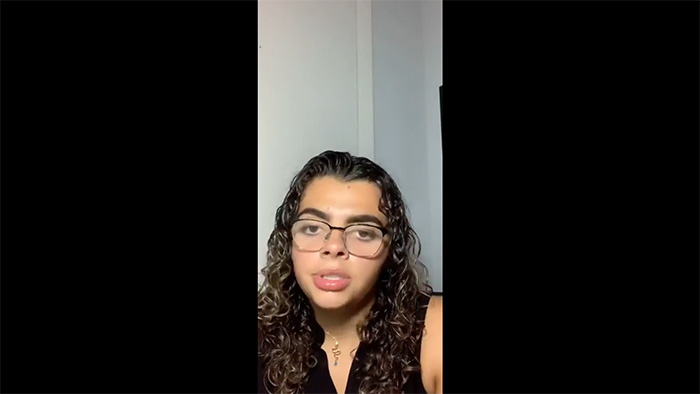 The hypothesis of this study is that highly and mildly disturbed areas in the Indian River Lagoon will have lower biomass and biodiversity of invertebrates and vertebrates compared to undisturbed areas. Three sites of each disturbance level were seined over three separate days, totaling 81 collections at nine sites. As hypothesized, the highly disturbed sites had the lowest biomass and biodiversity compared with undisturbed and mildly disturbed sites. This study further supports the need to reduce human disturbances in the Indian River Lagoon to ensure the lagoon remains one of the most biodiverse estuaries in the Northern Hemisphere. 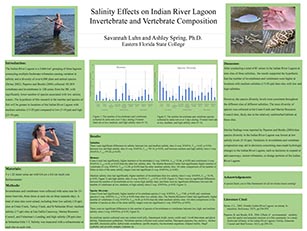 Abstract: The Indian River Lagoon is a 5,666 km2 grouping of three lagoons connecting multiple freshwater tributaries, causing variation in salinity, as well as invertebrate and vertebrate composition. The hypothesis of the research was that the number and species of invertebrates and vertebrates are greater in locations of the Indian River Lagoon with medium salinities (15-20 ppt) compared to low (5-10 ppt) and high (25-30 ppt) salinities. 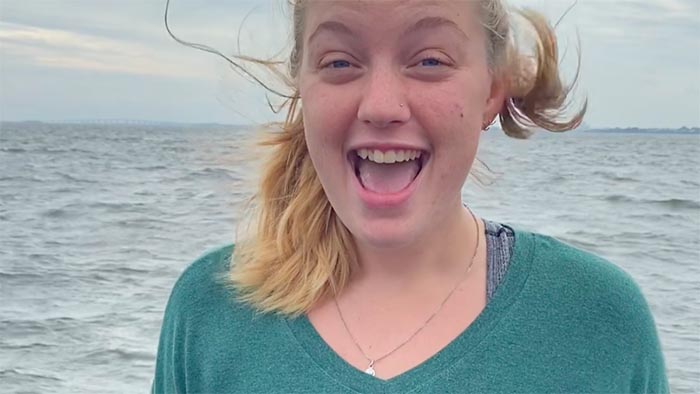 Organisms were collected via seine nets with three repetitions on three separate days at three sites for each salinity, totaling nine sites and 81 seines in the Indian River Lagoon. The results supported the hypothesis that the number and species of invertebrates and vertebrates were higher at locations with medium salinities (15-20 ppt) than at sites with low and high salinities. Similar findings were reported by Paperno and Brodie (2004) that species diversity in the Indian River Lagoon was lowest at low salinity levels (5-10 ppt). Variations in invertebrate and vertebrate composition may aid in decisions concerning man-made hydrologic changes to the Indian River Lagoon.

Abstract: For my service-learning project, I have been working toward completing an online service/volunteer experience. This project has required locating an online non-profit organization to volunteer with and logging a total of at least 32 hours worked, as well as keeping a journal of what I see, hear, and feel. The organization I have chosen for my service-learning project is the Smithsonian Digital Transcription Center. This organization works to create accessibility to historical documents by creating text-searchable and readable versions of online historical documents found in their online collections. This work is done through the help of online volunteers who work to transcribe one page at a time and work together to complete projects. 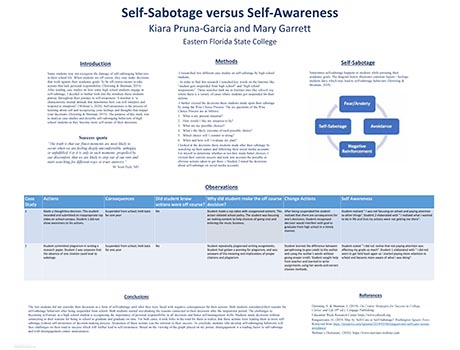